According to the All Things Dogs site, dog anatomy is generally the same in terms of physical anatomy and characteristics, even though they have different appearances. Dogs have a skeletal system, but they do not have a collar bone. 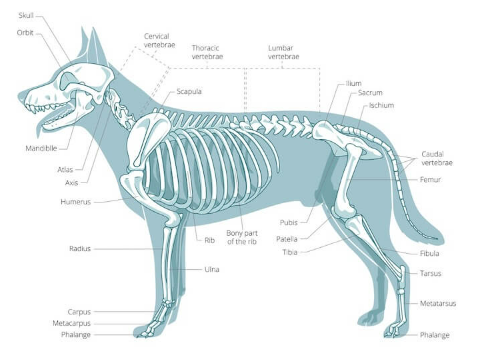 Dogs also have a brain for learning and teeth for eating, holding and chewing. However, it is important to note that toy breeds have a skeleton that will mature in around 6 months, while large breeds can take between 18 months and 2 years to make their growth plates to fuse.

There are 320 bones in a dog’s body and it depends on the length of their tail and there are around 700 muscles. Muscles in their body attach to bones through tendons. They have different types of muscle fibers depending on the breed of dog.

Have you heard about slow and fast twitch muscle fibers? Well, a luncher will have faster twitch (anaerobic) fibers in their legs than the Alaskan Malamute, which has slower twitch (aerobic) fibers.

As explained on the All Things Dogs site, lunchers have been bred for speed and agility and they need short bursts of energy of speed.

How about sled dogs? They need continued blood flow to their muscles for endurance. So, that’s why sled dogs are known for being ‘fatigue-proof’.

How about dog leg anatomy? You are able to read below and the source is still from the All Things Dogs site.

What are the parts of the foreleg? In the foreleg, there is a shoulder, ulna, elbow, humerus radius and wrist. There are a lot of large breeds who can suffer from elbow dysplasia where there is abnormal development in joints. Lameness is the most common symptom. Lesions in the elbow joint usually begin in puppy hood so that when they are over-exercise, it must be careful.

To some owners, the hind legs can be confusing, but it has some of the same features like human. Femur is the bone between the hip and knee and below the knee is the tibia and fibula. There is also a hock where it is like the human ankle. Same as the elbow, there are a lot of large breeds who suffer from abnormal development in the hip joint and it is known as hip dysplasia. It is important to note that hip dysplasia is usually hereditary. Environmental factors can also influence the development of hip dysplasia including diets with high calcium and Vitamin D content, rapid weight gain/ growth, over-exercise when they are puppies and climbing stairs and access to slippery floors.

Tail in a dog is not only for waging to show that they are happy. Tail has more functions. As you know that there are some forms of tail where it can be short, long, flat or curly. As explained on the All Things Dogs site, the tail is an extension of the spine. It means that if there is an injury to the tail, it can be serious. The bones of the tail are called vertebrae and they have discs to cover the gap between. There are muscles and nerves in the tail which contribute to bowel control and movement.

Well, if we talk about tail, you may have heard about a statement which says that happy tail happy dog. However, is it true? Happy tail is a condition when the dog continuously wags their tail, hitting it on anything that it faces. The important thing that must be known is that it can lead to lesions, which because of the nature of the problem, do not heal. If the tail is bandaged, usually it can help and keep the dog in large open plan areas.

How about tail docking? It is a common practice in working dogs. However, there are more researches which show that tail docking is linked to subsequent chronic pain and heightened pain sensitivity.

So, we can conclude that the tail of a dog has a lot of functions including counter-balancing the weight of the body when turning at speed.

There are four oval shaped pads which are known as digit pads and there are also the large pad which can be found in the middle and it is known as the metacarpal or metatarsal pad, depending on whether it is their front or rear leg. There is the carpal pad which is slightly further up their front leg and it sticks out.

What is the function of paw pads? They are important for cushioning of the bones, giving traction and abrasion resistance. Let’s say that there is trauma or injury to any one of the pads. If so, it can result in loss of limb function. Aiding traction are also the dew claws and these are what you can call thumbs in humans. Some dogs only have dew claws on their front legs, some on all four legs and some do not have any of these.

Do Maltipoos Chew Furniture?
When teething gets started, your Maltipoo can

Are Maltipoos Good with Kids?
If you are considering a new dog

How Smart Are Maltipoo Dogs?
The first word that comes to our

How to Introduce a Maltipoo to a Cat
Maltipoos are known for their adorable appearance.